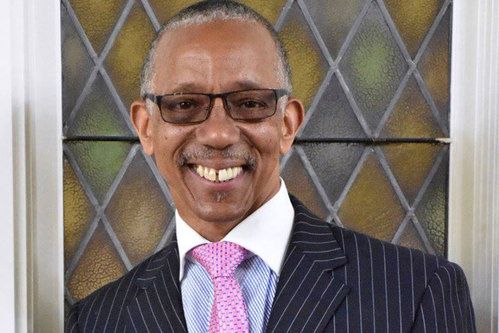 Pastor Phillip A. Lewis is the Pastor of New Mount Pleasant Missionary Baptist Church (NMPMBC), 434 S. Grevillea Ave Inglewood, CA. He was born in Oakland, California in 1955. He attended Oakland public schools and graduated from Castlemont High School in 1973. He enlisted in the United States Marine Corp in 1973 and was honorably discharged in 1979.
Pastor Lewis holds an Associate of Arts Degree from Vista College Berkeley CA, a Bachelor of Arts Degree in Religious Philosophy, and a Master of Divinity degree from Faith Evangelical College and Seminary, in Tacoma WA. Pastor Lewis also earned his Doctorate in Theology and was awarded an Honorary Doctorate of Divinity for Community work in the Oakland Area from the Sacramento Theological Seminary and Bible Institute, Sacramento CA.
Prior to becoming the Pastor of NMPMBC, Rev. Dr. Lewis was the Senior Pastor of Israelite Missionary Baptist Church (IMBC) in Oakland, CA for twelve years. While serving as Pastor of Israelite, Dr. Lewis implemented a mentoring program called “Talks” (Teaching A Little Knowledge Systematically) that partnered with the Oakland Unified School District in particular the Charter School, Community School for Creative Education. This school specializes in working with children from the inner cities who have suffered from trauma. Dr. Lewis and his church also partnered with other churches and schools in the Oakland area to improve community relations and to try and stop gun violence by working with Oakland Community Organizations (OCO). This organization performed night-walks against violence in Oakland, a model based on the Boston “cease-fire” model. This cease-fire model was implemented in five other major cities in the United States. In his overall ministry as Senior Pastor of IMBC, Rev. Dr. Phillip A. Lewis licensed and ordained men and women in the Gospel Ministry. His ministry here at NMPMBC is remains inclusive of both genders.
Pastor Lewis was licensed in 1986 and ordained in 1988 by Rev. Dr. Milton M. Merriweather, founding Pastor of New Mount Pleasant Missionary Baptist Church. Pastor was called as Senior Pastor on November 2, 2013 and installed as the Pastor on January 12, 2014. Pastor Lewis mission and vision for NMPMBC, is to see the Church actively engage the community for the Kingdom of God in a Spirit of Excellence.
As a career professional, Dr. Lewis worked as a Clinical Case Manager and Counselor for children and youth with behavioral issues and adults with severe mental illnesses and co-occurring disorders.
Dr. Lewis shares his life and ministry with “the love of his life,” his wife, Mrs. Mironda Lewis. They have three grown children: Jevon, Danielle and Aaron (AB) and they are proud grandparents of nine.
Dr. Lewis, serves as the 2nd Vice President of the Inglewood Area Ministers Association, and is also a member of the Southern California Baptist Ministers Association.   Dr. Lewis along with the church body of NMPMBC, are working to evangelize the City of Inglewood and its’ surrounding communities, that we may turn our communities and our nation back toward God, and “Serve Christ in the Spirit of Excellence.”
Contact